In the past few months, the definition of normal has changed for institutions, individuals, and industries. At Radix, when the future seems blurry, we go back to data and insights from the past to get some perspective. In our exclusive Radix Speak series, we’re bringing to you in-depth ideas on how the domain industry and everything associated with it will evolve in the coming months so that we all can be better prepared for it. To start off this series, we have Bala GR, Head of Business Intelligence at Radix, study and analyze data from the domain industry since 2008 to gauge how 2020 might shape for us. A lot has already been spoken about the strange turn of events that have kept the global economy on the hook this year. Sure, we expected a recession; it was a long time due. What we didn’t expect was a pandemic and a worldwide self-quarantine for months on end. A few years from now, we will be looking back at 2020 with awe and absurdity in equal measure. Talking of looking back, this year opens up the perfect opportunity to examine the 2008 recession. After all, that’s our only benchmark in these uncertain times. While a decade has since passed, there are trends that could help us make a fair prediction of what lies ahead of us this time around.

Making sense of the past

For the new domains industry, this is the first-ever experience of an economic downturn. As far as we and our new-domains-registry friends are concerned, looking at the legacy domain trends immediately before and after 2008 can be quite suggestive at this point. So, that’s exactly what we did. We looked at whatever relevant data we could find for years before and after 2008. Was it useful? To a large extent, yes. 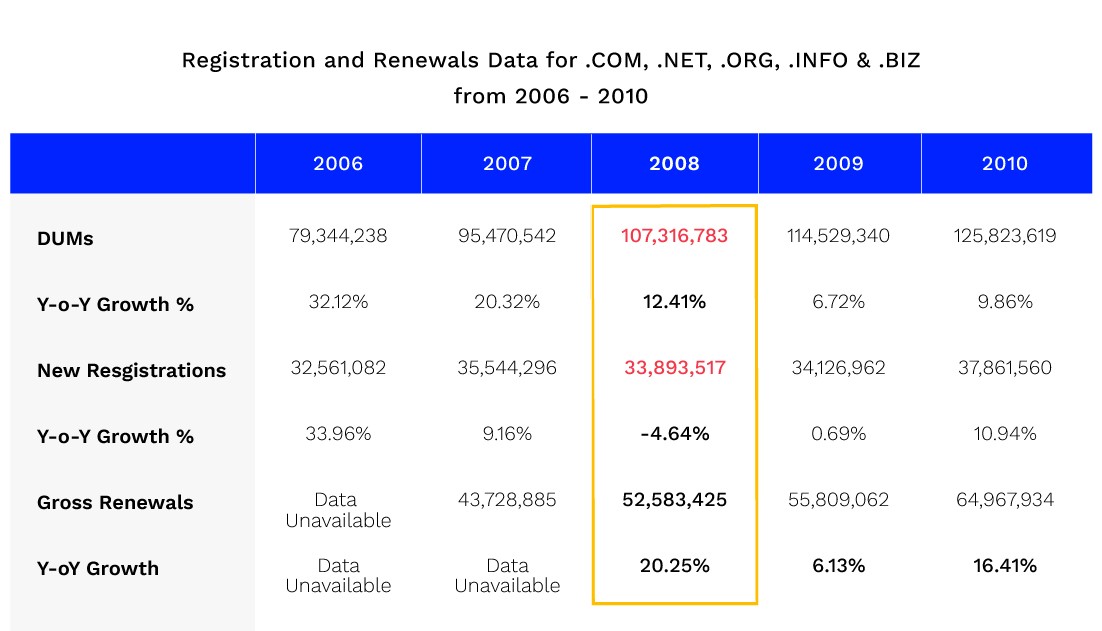 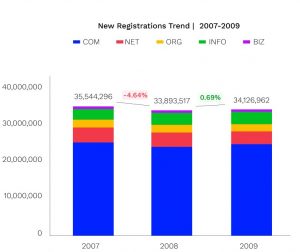 Assumptions and Data Details: And as can be seen here as well, the first-year renewals dipped to 45% in 2009, from a much higher average of ~58% in the previous years. This could be attributed to the overall market sentiment during that period, the quality of the names, and the general pressure on businesses.

What does it mean for us? Three words: Proceed with caution

Based on publicly available data, the domain industry, on the whole, has reported a surge in domain name registrations since February 2020. Legacy gTLDs’ new registrations have seen a 5%~ jump in March 2020 and 10%~ jump in April 2020 when compared to the average monthly registrations for 2019. (Refer table below)

However… and it’s a big however

We cannot ignore the fact that times are vastly different now when compared to 2008. The society is more dependent on the Internet today than ever before.  And if that wasn’t enough, the pandemic has further accelerated the transition from offline to online for businesses across the board. This is a unique situation for our industry. As more and more businesses, institutions, and even next-door services are going online and speedily evolving their technology usage, our industry stands to play a crucial role in this mix. So, our guess is as good as yours when it comes to expecting the future. At Radix, we live and breathe data! And yet, at an interesting juncture like this, there isn’t any data that we can rely on 100%. For what it’s worth, we have looked at the past. As for the future, it seems to be hanging on that big “however” we spoke of above. This article was originally published on Domain Name Wire.

Wish to report an issue
with a domain?

radix.website is committed to ensuring that your privacy is protected. Should we ask you to provide certain information by which you can be identified when using this website, then you can be assured that it will only be used in accordance with this privacy statement.

What we collect? We collect information from you when you fill out a form.

When trying to contact us on our site, as appropriate, you may be asked to enter your:

You may, however, visit our site anonymously.

What we use information for? Any of the information we collect from you may be used in one of the following ways:

Your information, whether public or private, will not be sold, exchanged, transferred, or given to any other company for any reason whatsoever, without your consent, other than for the express purpose of delivering the service requested.

Do we use cookies? Yes (Cookies are small files that a site or its service provider transfers to your computer’s hard drive through your Web browser (if you allow) that enables the sites or service providers systems to recognize your browser and capture and remember certain information.

We use cookies to compile aggregate data about site traffic and site interaction so that we can offer better site experiences and tools in the future.

Google, as a third party vendor, uses cookies to serve ads on your site. Google’s use of the DART cookie enables it to serve ads to your users based on their visit to your sites and other sites on the Internet. Users may opt out of the use of the DART cookie by visiting the Google ad and content network privacy policy. As you browse www.radix.website, advertising cookies will be placed on your computer so that we can understand what you are interested in. Our display advertising partner, AdRoll, then enables us to present you with retargeting advertising on other sites based on your previous interaction with www.radix.website. The techniques our partners employ do not collect personal information such as your name, email address, postal address or telephone number. You can visit this page to opt out of AdRoll and their partners’ targeted advertising.

Overall, cookies help us provide you with a better website, by enabling us to monitor which pages you find useful and which you do not. A cookie in no way gives us access to your computer or any information about you, other than the data you choose to share with us.

You can choose to accept or decline cookies. Most web browsers automatically accept cookies, but you can usually modify your browser setting to decline cookies if you prefer. This may prevent you from taking full advantage of the website.

Links to other websites Our website may contain links to other websites of interest. However, once you have used these links to leave our site, you should note that we do not have any control over that other website. Therefore, we cannot be responsible for the protection and privacy of any information which you provide whilst visiting such sites and such sites are not governed by this privacy statement. You should exercise caution and look at the privacy statement applicable to the website in question.

Do we disclose any information to outside parties? We do not sell, trade, or otherwise transfer to outside parties your personally identifiable information. This does not include trusted third parties who assist us in operating our website, conducting our business, or servicing you, so long as those parties agree to keep this information confidential. We may also release your information when we believe release is appropriate to comply with the law, enforce our site policies, or protect ours or others rights, property, or safety. However, non-personally identifiable visitor information may be provided to other parties for marketing, advertising, or other uses.